It was August 31, 1993, and the sun was shining when eight men entered a makeshift soccer pitch in the middle of the Taubaté prison. Taubaté housed some of the most dangerous criminals in the state of São Paulo, but the authorities had organized the games anyway as a way for the prisoners to blow off steam.

The men on the pitch were from the Primeiro Comando da Capital (First Capital Command – PCC). They lingered until the guards opened the door for the rival team from the Comando Caipira (Redneck Command). The two were rivals beyond the pitch: the PCC controlled one wing of Taubaté, the Caipira the other.

After the guards closed the door, a fight broke out. Or a massacre. It is not clear from the multiple and varying accounts that have followed. What is clear is that at least two of the Comando Caipira leaders were killed, and the PCC took control of the prison.

*This story is part of a two-year investigation into the PCC by the Center for Latin American and Latino Studies (CLALS) at American University and InSight Crime. The complete series will be published between December 11 and 18. See full report here or download it from the Social Science Research Network.

Thus began the PCC, one of the world’s most successful prison gangs. It has since expanded to as many as 30,000 members, dominating criminal markets in six Brazilian states with a combined population of more than 76 million.

Much of this growth has taken place since 2015, as the group moved into new territories, contributing to convulsions of violence in entire regions of northern Brazil. During this period, the PCC has also expanded into neighboring Paraguay and built connections to criminal markets across South America and into the Caribbean, Africa and Europe.

This report analyzes the phenomenon of the PCC and the factors that have enabled its rise and spread. It is the result of a research project of the Center for Latin American and Latino Studies (CLALS) at American University and InSight Crime. (You can also find a version of the report on the Social Science Research Network site.)

It was born from a multi-disciplinary study that mapped transnational organized crime in Argentina, Brazil and Paraguay. The project set out to evaluate, among other themes:

We have used case studies from judicial cases to reinforce our understanding of criminal dynamics. We understand that these examples are not perfect representations of how crime works and that there may be a sample bias, as prosecutors have a clear interest in depicting criminal organizations as complex, sophisticated criminal groups that should be subject to conspiracy laws similar to the Racketeer Influenced and Corrupt Organizations (RICO) statute in the United States.

Nonetheless, the testimonies and experiences of members of the organized crime networks and their victims provide an important perspective on criminal dynamics and law enforcement effectiveness. Further, when triangulated against information from interviews and prior studies, this information serves to fortify our knowledge base.

Below are some of our major findings:

– In fewer than thirty years, the PCC has grown from a handful of prisoners into a powerful transnational criminal organization (TCO).

– The PCC is now the dominant TCO in the criminal markets of southeastern and western Brazil; it has control over the most important southbound trafficking routes; and it has privileged access to Brazil’s largest airports and ports. Together with its allies, it is also increasingly powerful in the northeastern region, which is also a significant transit point to the Caribbean, Africa and Europe.

– The PCC operates in a manner akin to a criminal cooperative or a secret society. This model of organization provides considerable autonomy to members and offers them privileged access to criminal resources, such as loans, arms, collective protection, and a network of contacts, which stimulate the criminal economy in Brazil.

– The PCC has gained strength in part because of its regulation of violence by criminals and in criminal markets and because of the support it provides to prisoners and their families. These tactics have lent it prestige, legitimacy and popular support, especially in poor communities.

– Although the PCC has not shown much interest in entering drug production in neighboring countries, its pursuit of drug supplies and rivalry with other Brazilian TCOs has pushed it further into regional South American trafficking distribution networks. It now reaches well into Paraguay, where its spread has been facilitated by deep-seated corruption and weak state capacity. The PCC has engaged in violence against rival gangs and seems increasingly well-positioned to make a bid for control of the Paraguayan penitentiary system.

– After two years of intense violence between the PCC and its competitors, a fragile truce appears to have emerged in Brazil’s north and northeastern states. However, the reasons for this truce are multiple and tenuous, including the segregation of criminal organizations in prisons and temporary federal government intervention in some states. In the past, the PCC has muscled back after similar moments of apparent calm.

– In recent years, the senior leadership of the PCC has been destabilized by law enforcement authorities’ continued interception of the group’s communications, by ongoing warfare with rival organizations and by the transfer of top leaders to federal penitentiaries. However, the amorphous organizational structure of the PCC appears to make it at least partially resilient to these challenges.

– The innovative PCC model is increasingly being emulated by its rivals, suggesting that even in the unlikely event that the PCC itself were completely extinguished, a more resilient model of criminal organization has been established, posing a significant and ongoing threat to law enforcement efforts across South America.

Over the next several days, we will publish several case studies to better illustrate these findings. You can also read the full report here. And you can consult the timeline of major events in the PCC’s near 30-year history below. 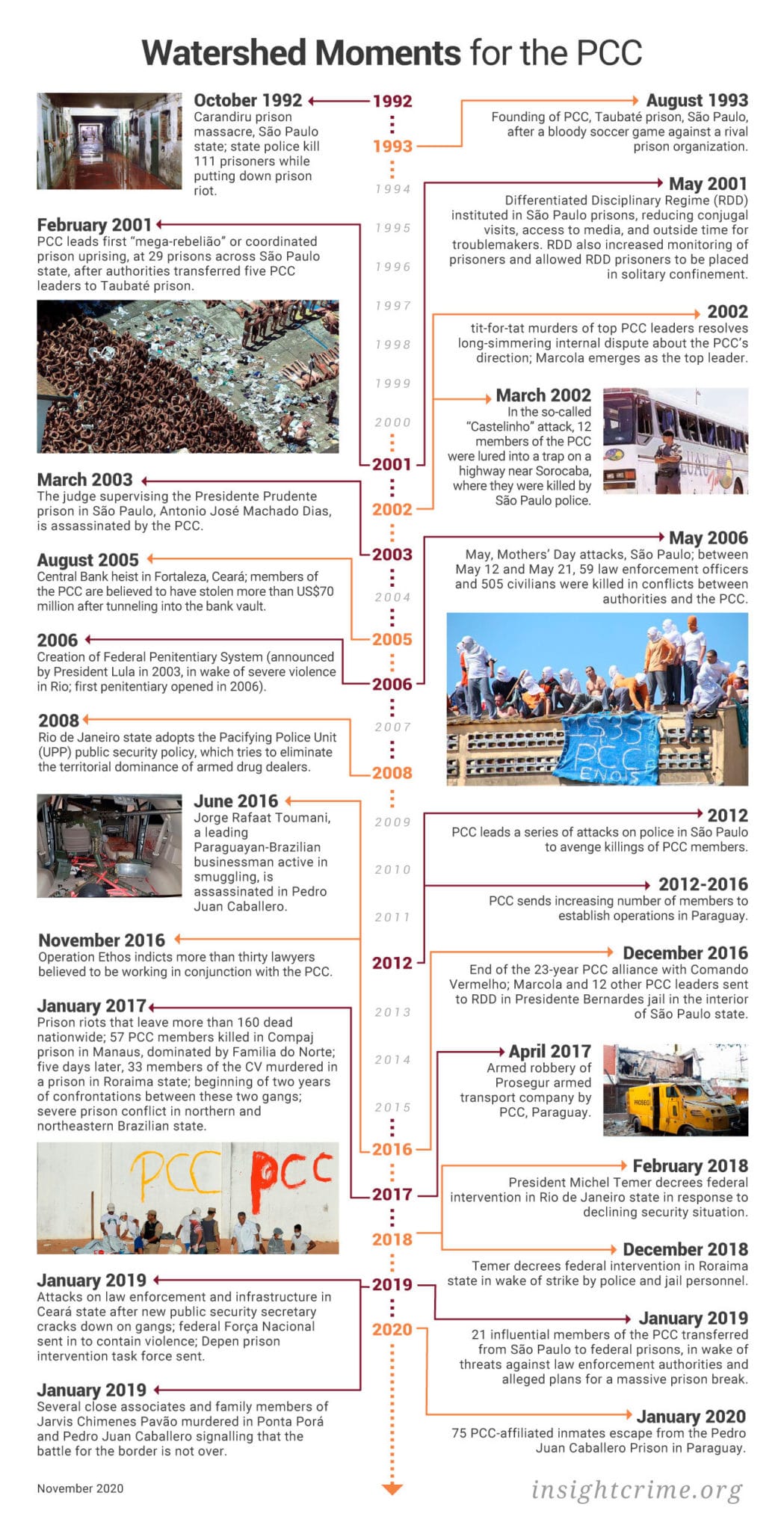 INVESTIGATION:
The Rise of the PCC: Expansion in Brazil and Beyond
1
PCC Investigation: Introduction and Major Findings
2
PCC: A Prison from Which There Is No Escape

What are your thoughts? Click here to send InSight Crime your comments.

We encourage readers to copy and distribute our work for non-commercial purposes, provided that it is attributed to InSight Crime in the byline, with a link to the original at both the top and bottom of the article. Check the Creative Commons website for more details of how to share our work, and please send us an email if you use an article.

An ongoing gang war in Ecuador’s prisons has made 2020 the bloodiest year on record for inmates, underscoring how the country’s penitentiary system cannot contain the escalating conflict among an increasing number of gang...

PCC: A Prison from Which There Is No Escape

The Rise of the PCC: Expansion in Brazil and Beyond

Based on 18 months of field work in Brazil and Paraguay, this investigation explores the First Capital Command (Primeiro Comando da Capital -...

Investigation and Analysis of Organized Crime